Have you ever tried to create an epic steampunk machine of your childish dreams in Blender? That heavy metal bastard that screams epic awesomeness.

As cool as Charlize Theron with a short haircut.

If yes, then you know how hard it is.

Actually I felt frustrated too when I tried to create something gorgeous on the wheels. The first few attempts looked hilarious. Imagine a toy shot using a macro mode.

But eventually (years passed!) I developed a workflow that helps me to create steampunk machinery in Blender.

After watching this 15 step steampunk tutorial you’ll be inspired to created your own steel monster. 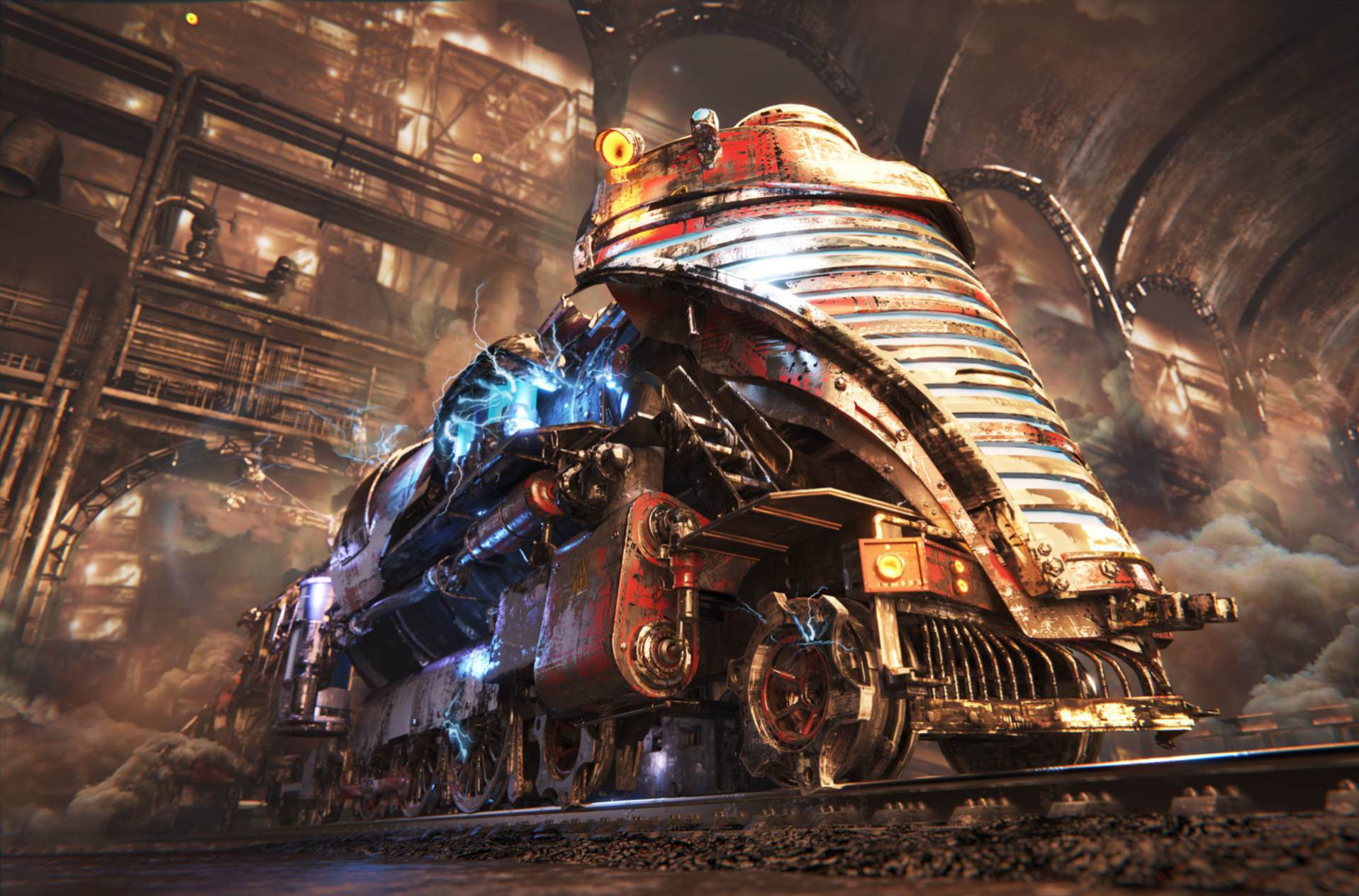 One more time. Get inspired.

If you need to invent the time machine, travel to future and see your work published in a magazine, do it. Or just drink some coffee. 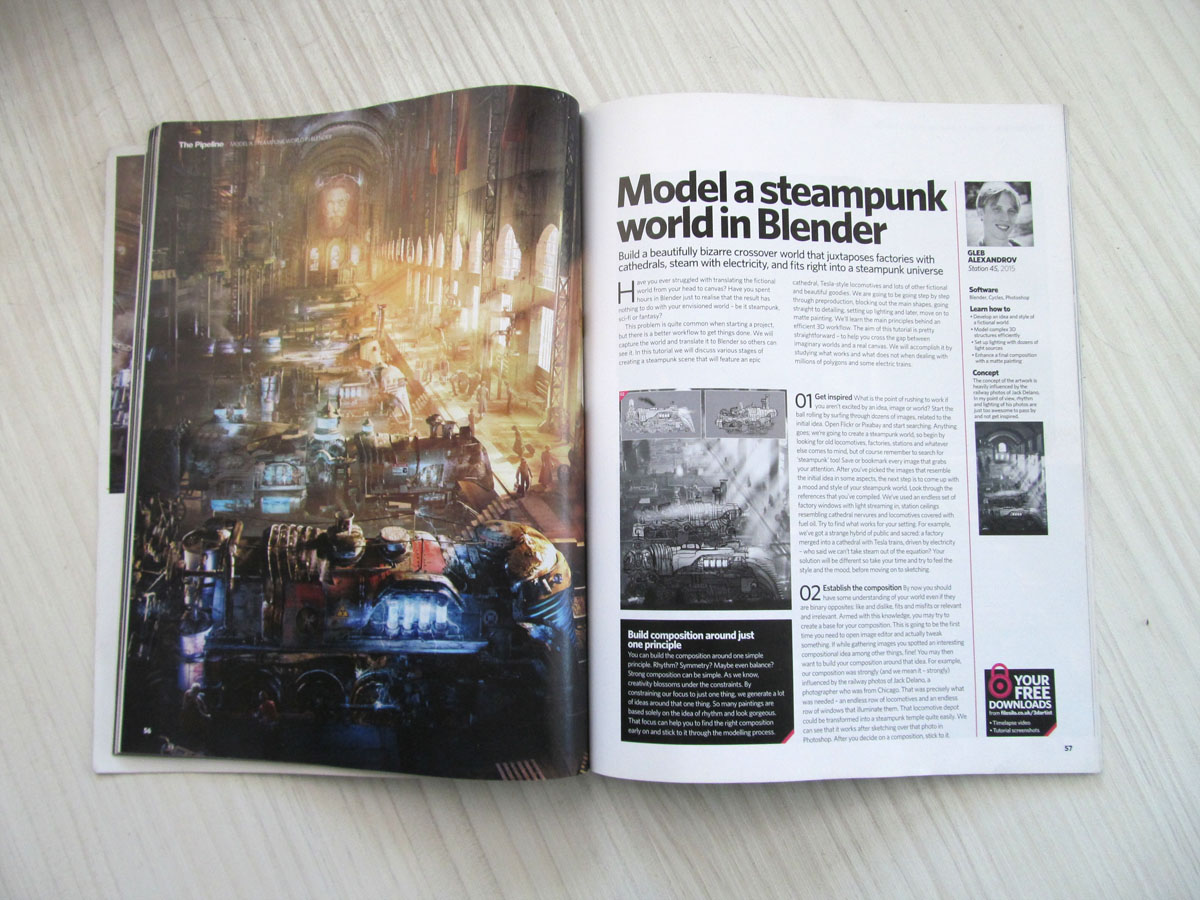 Good is not enough. You’ll need a great references of locomotives.

So take your time and visit Pixabay and Flickr.

Search by keywords that sound steampunk to you. 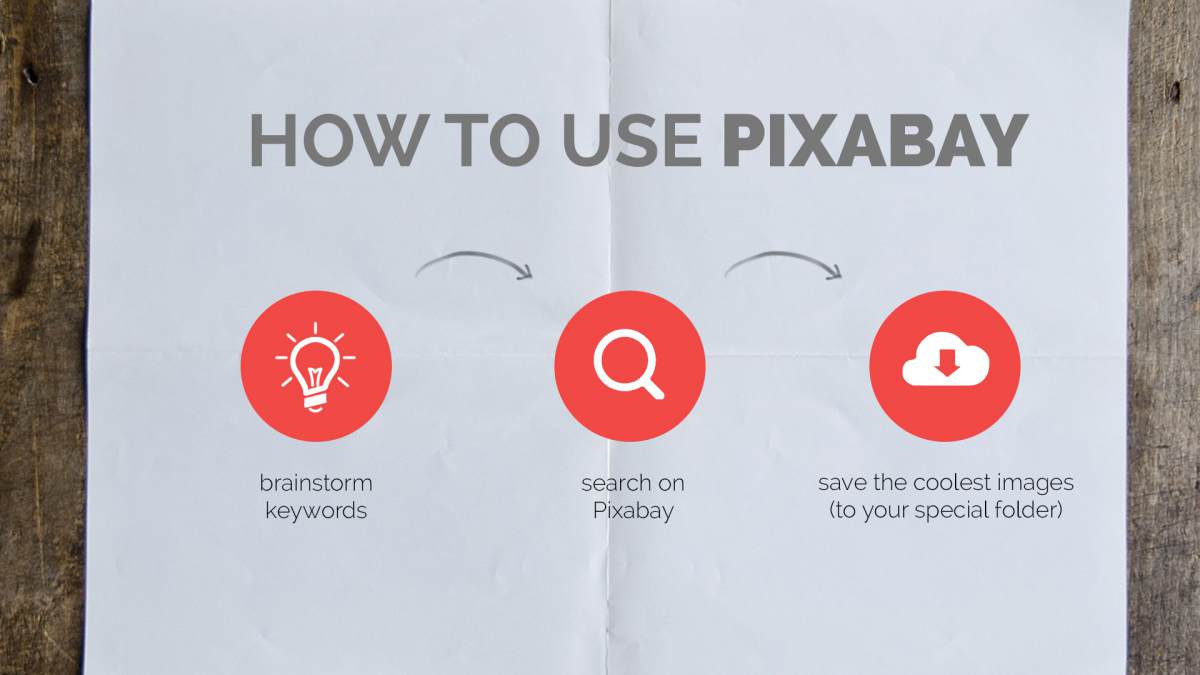 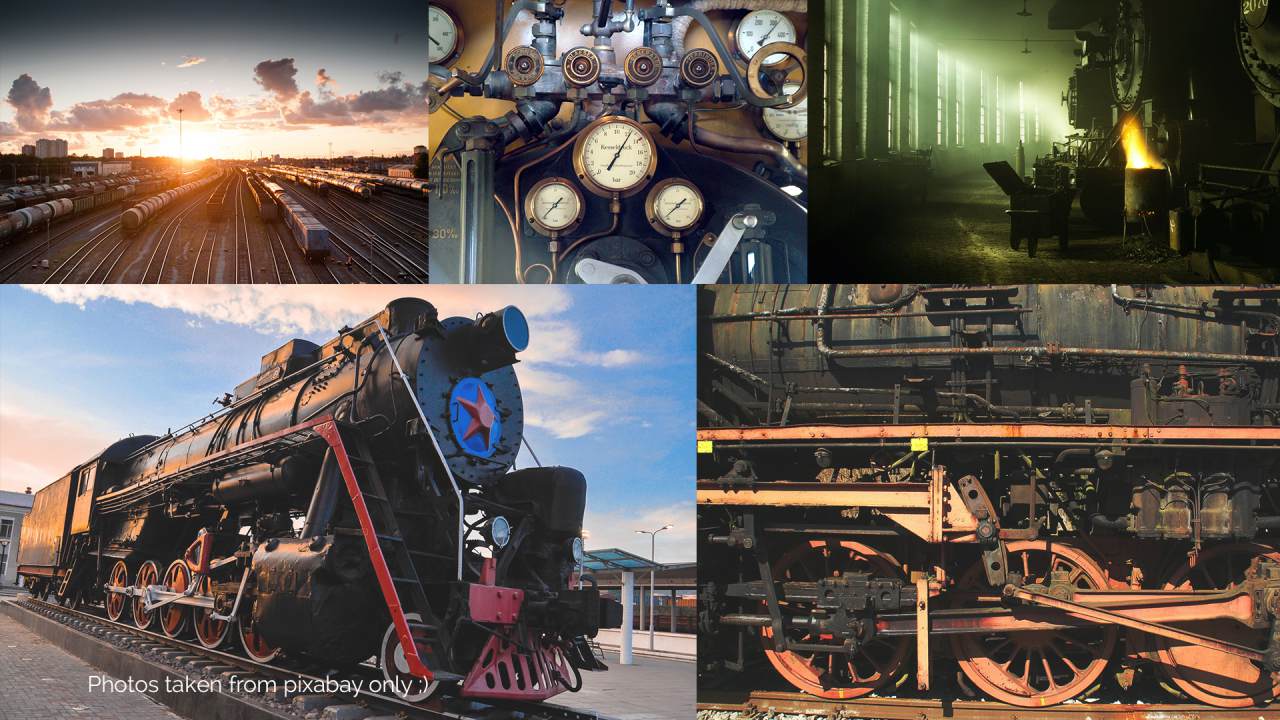 All joking aside, starting from scratch is insanely hard.

We live in the epoch of compilation and remix. So don’t be ashamed to build upon the ideas of other people.

(You may even end up reading Steal Like an Artist book by Austin Kleon).

I bet, they will be glad to see their work given the second life! Made even more bombastic and reborn into epic steampunk creation. 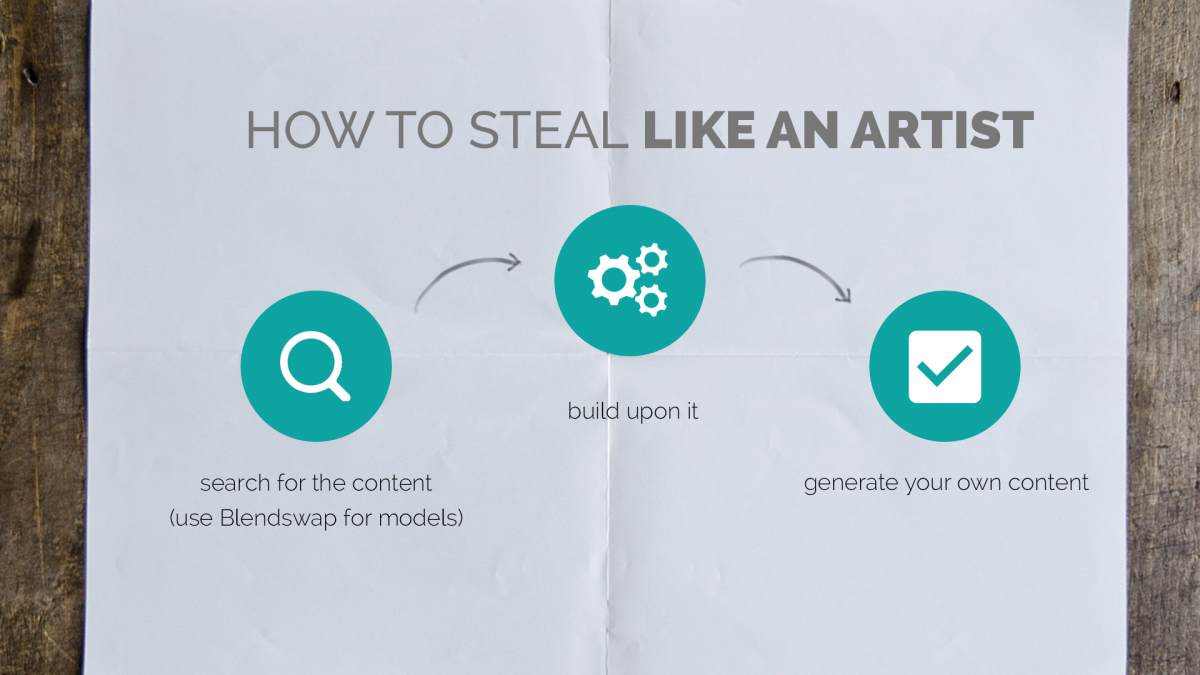 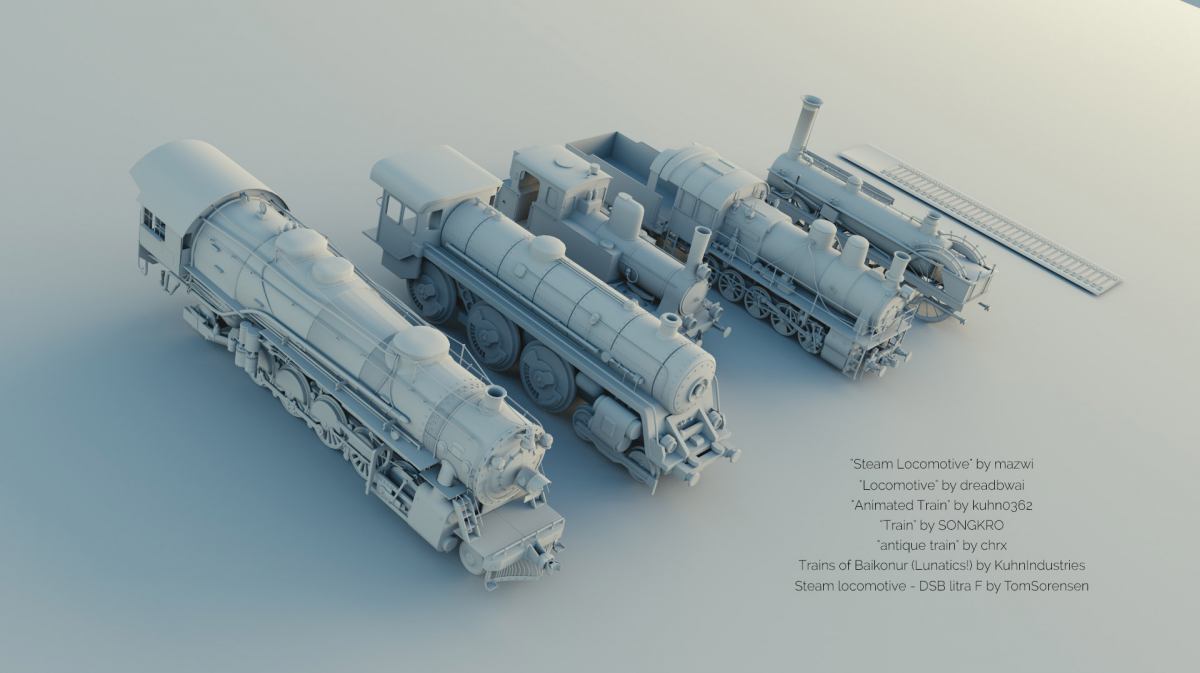 Draw some sketches. If you can’t draw, make a collage.

Take your time and don’t worry if your sketch looks hilarious. Honestly I think that all my sketches are hilarious indeed!

If you feel stuck, use Alchemy to generate the ideas for the concept art. 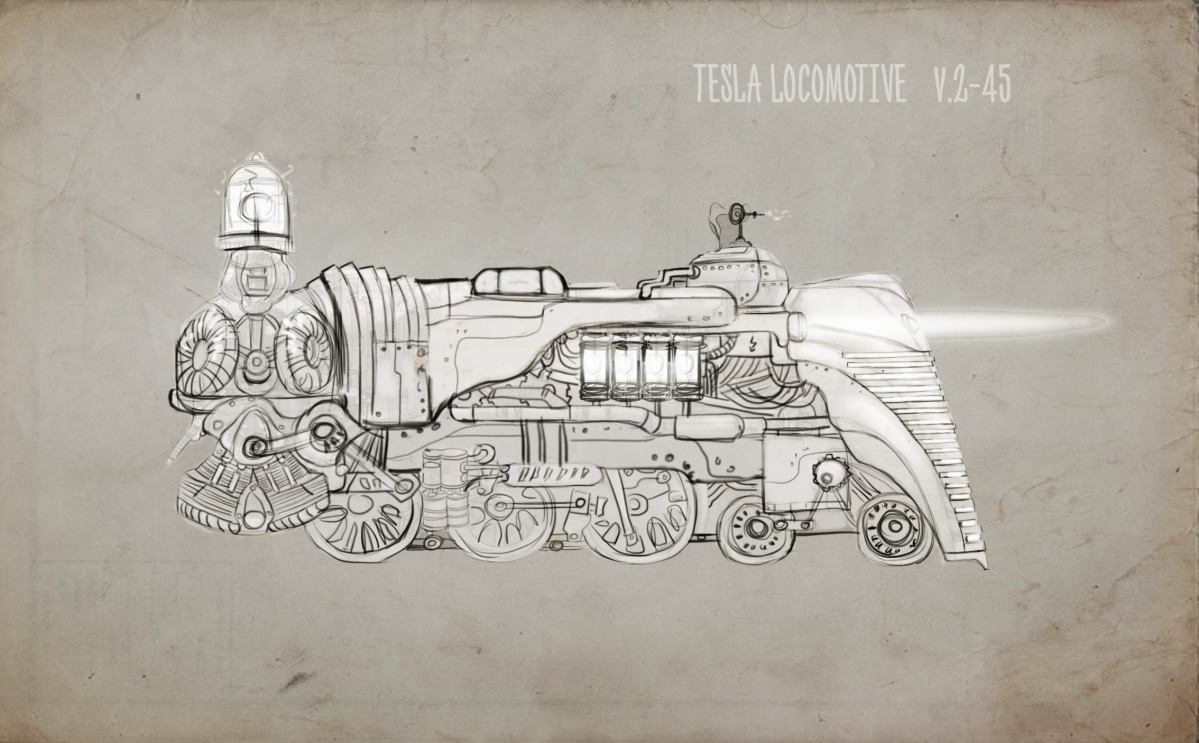 5. Block Out a Basic Model

One thing I really want to emphasize.

Don’t even try to make everything at once. You will end up making crap.

Iterate through your work like a path tracing algorithm.

Block out a basic model, then slowly improve it.

“If your image has a nice distribution of big (primary), medium (secondary) and small (tertiary) shapes, the resulting image will tend to be more pleasing to the eye.”

Start with primary shapes, then iterate through 2nd and 3rd read.

If you want something to look huge, add the super tiny details to it.

But don’t distribute these details uniformly across the surface.

Leave some areas flat and boring. 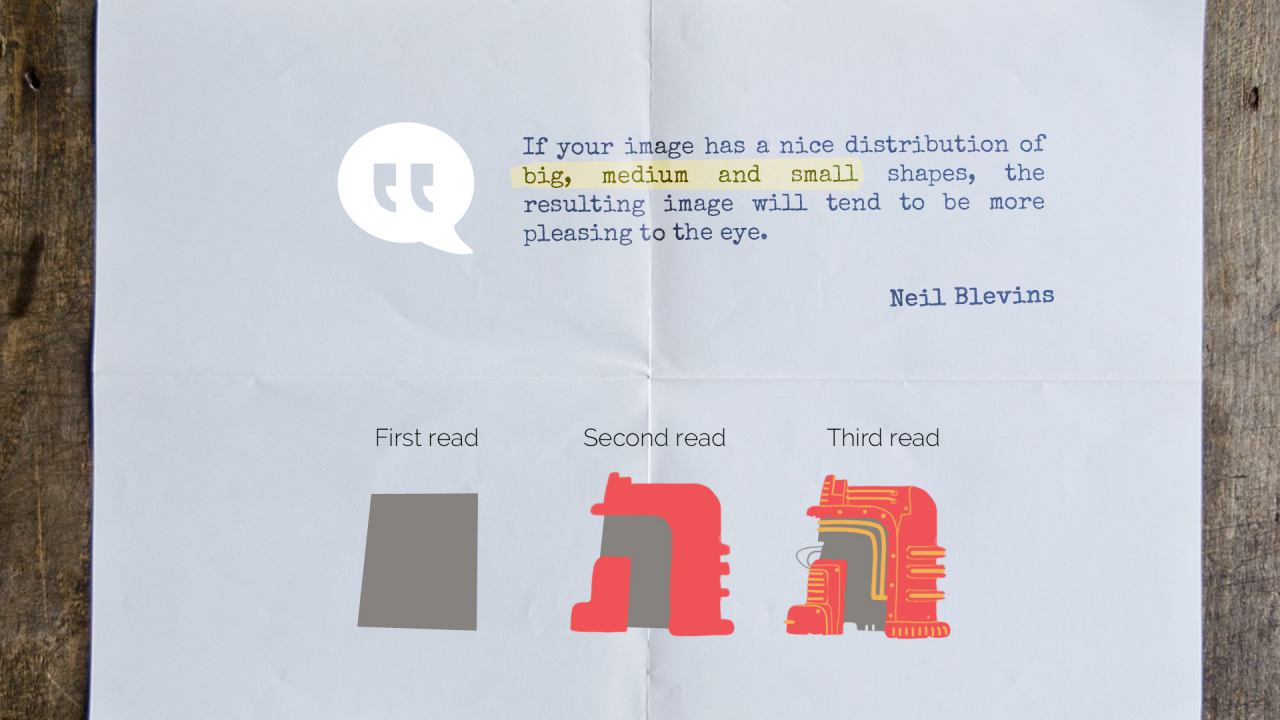 Now continue adding the details like there is no tomorrow.

Here are 3 reasons why details matter:

• Details enhance the impression of scale

• Details contribute to the setting 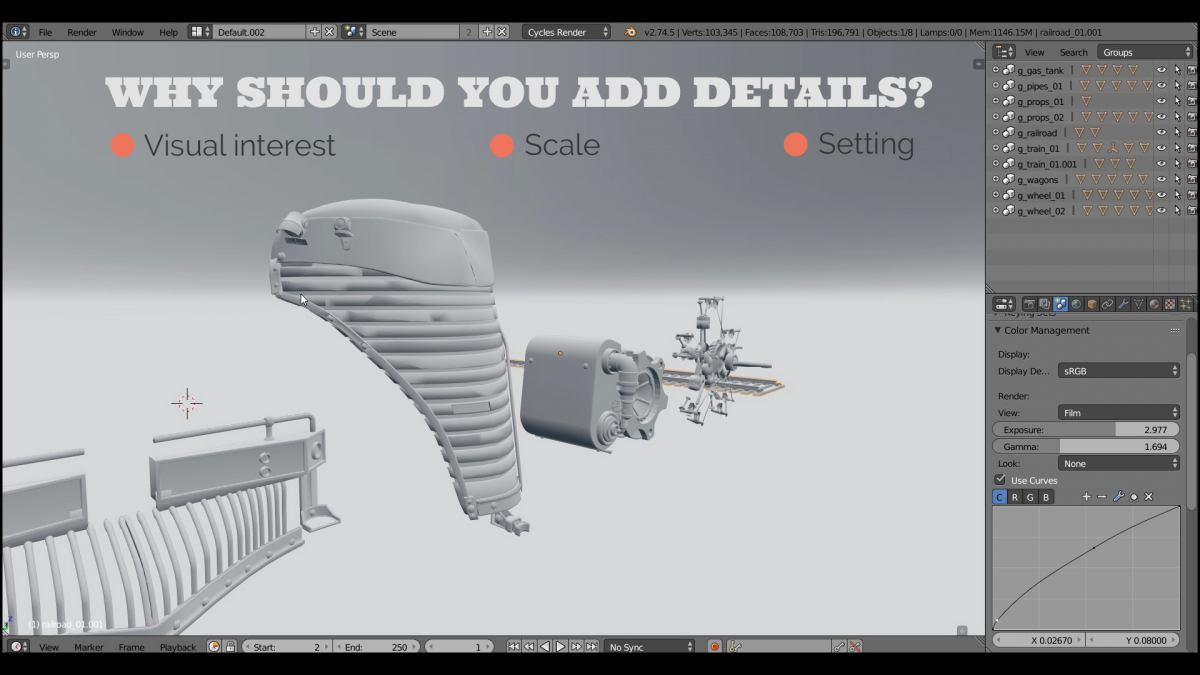 Angle can make your steampunk machine look like a toy train.

Or it can make it look like an epic steampunk monster.

Move the camera lower and bam, the locomotive starts to look menacing.

To push the effect to the limit, set the focal length to 24mm. It will exaggerate the perspective and make the foreground  and background appear further apart. 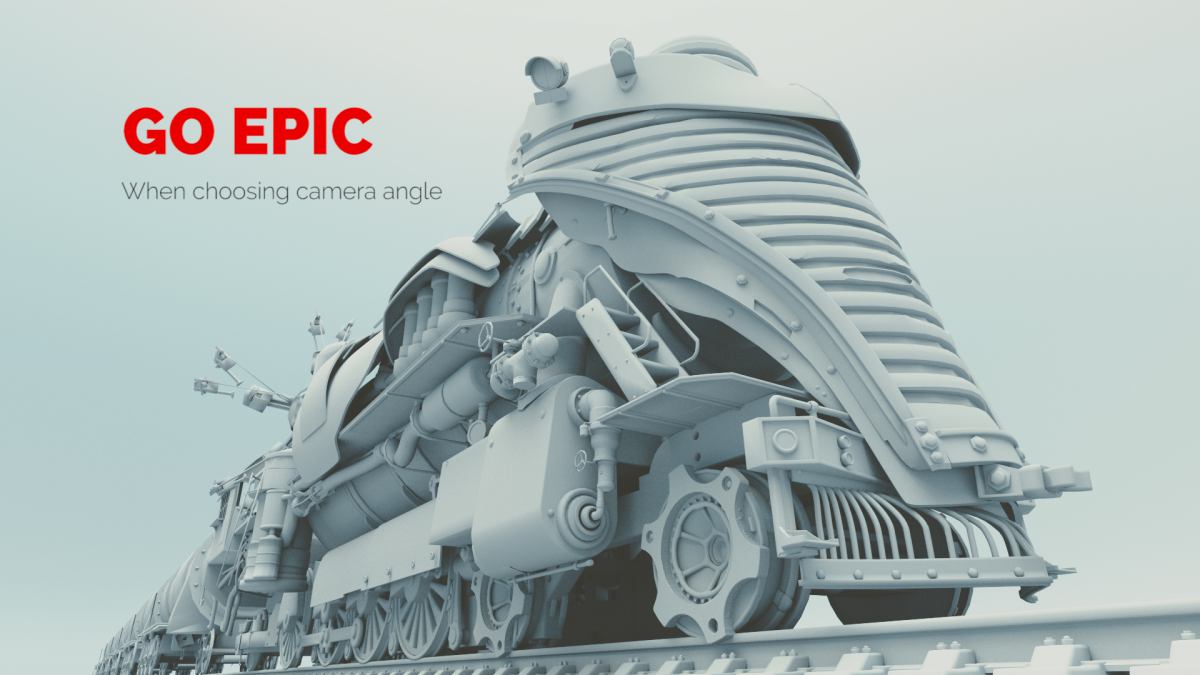 Start with adding a strong key light. Position it so it illuminates the machine from behind.

You may say: that’s an edge light!

But it’s also the most prominent light in the scene. Quite a dramatic one in terms of the contrast and the angle.

So let it be the key light.

After that just add a fill light of a cooler tone. 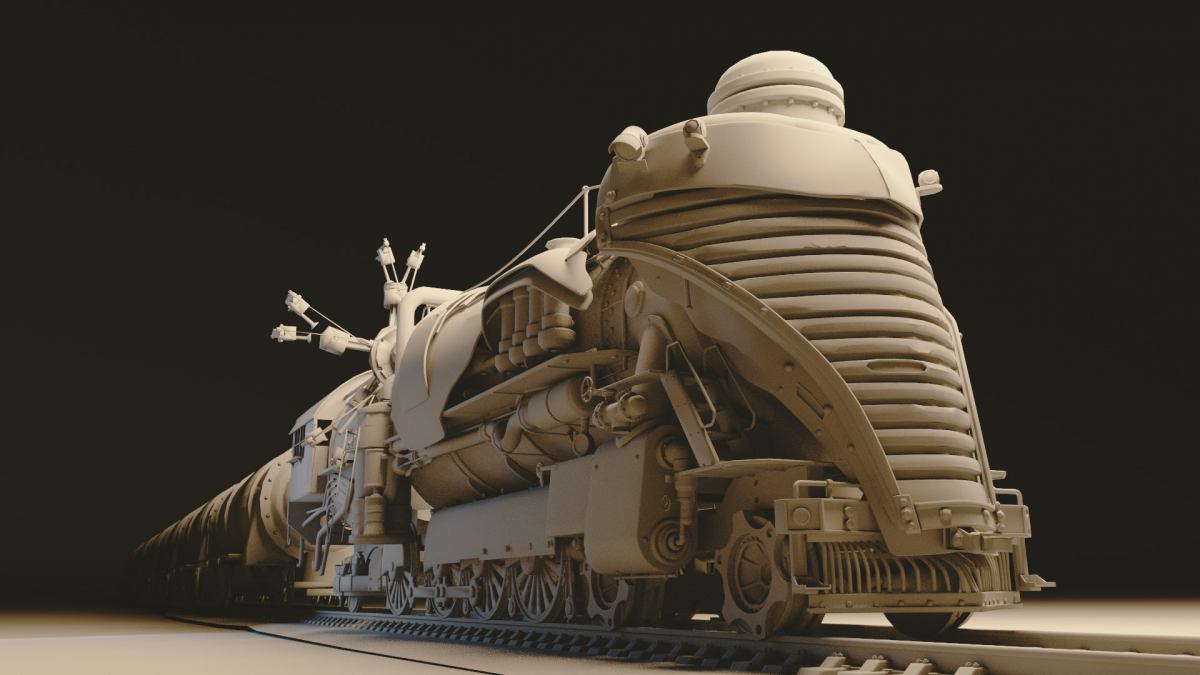 Break the process into three stages.

• Paint the texture in Photoshop or Gimp 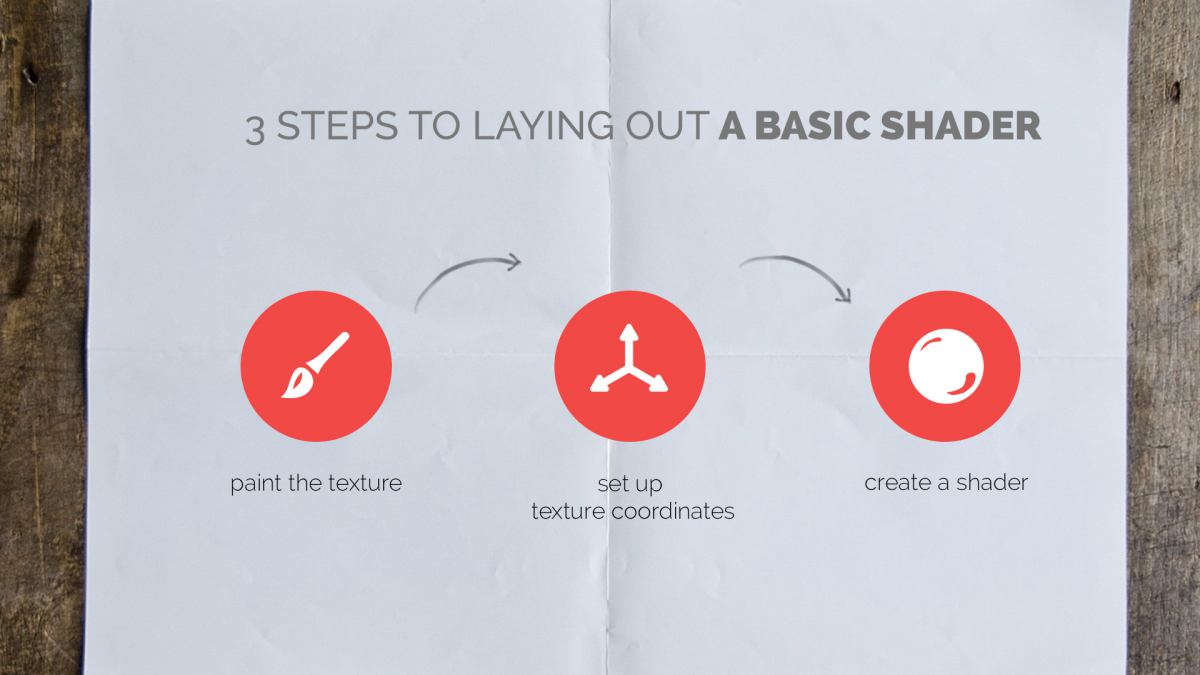 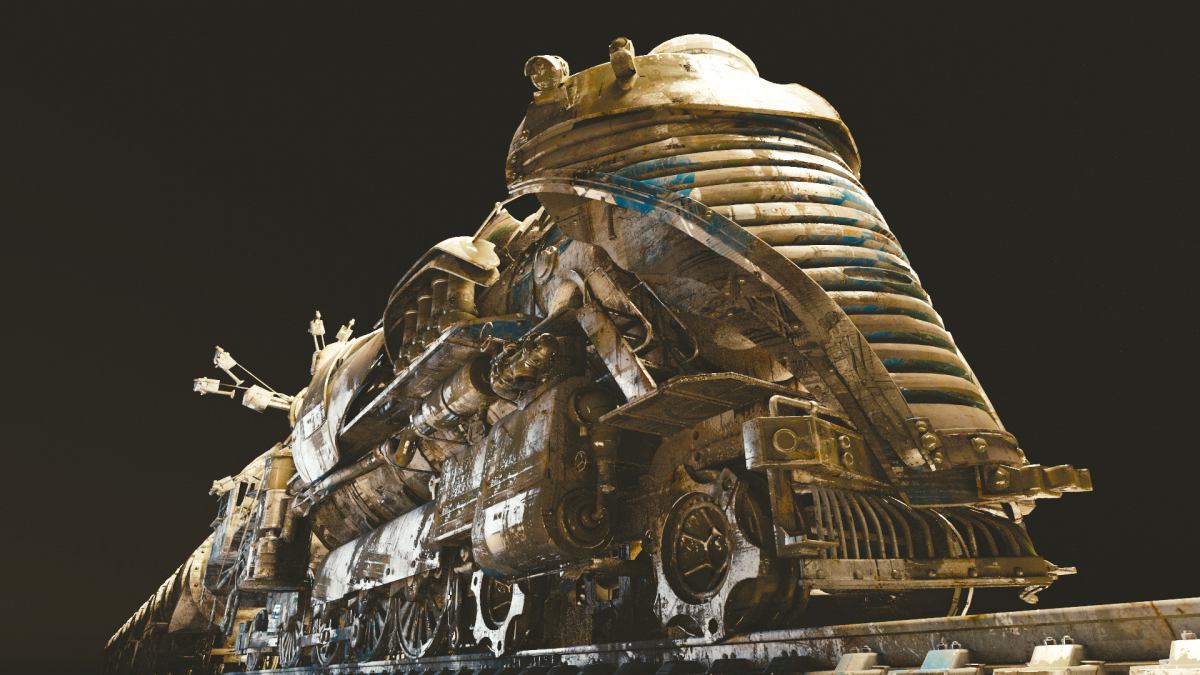 Now let’s take material variety to the next level.

Create the second material, a bright red one. It will break up the repetition.

Also let’s add the decals (signs, fake details and so on).

This time, use UV coordinates to place the decals precisely where you want them to be. 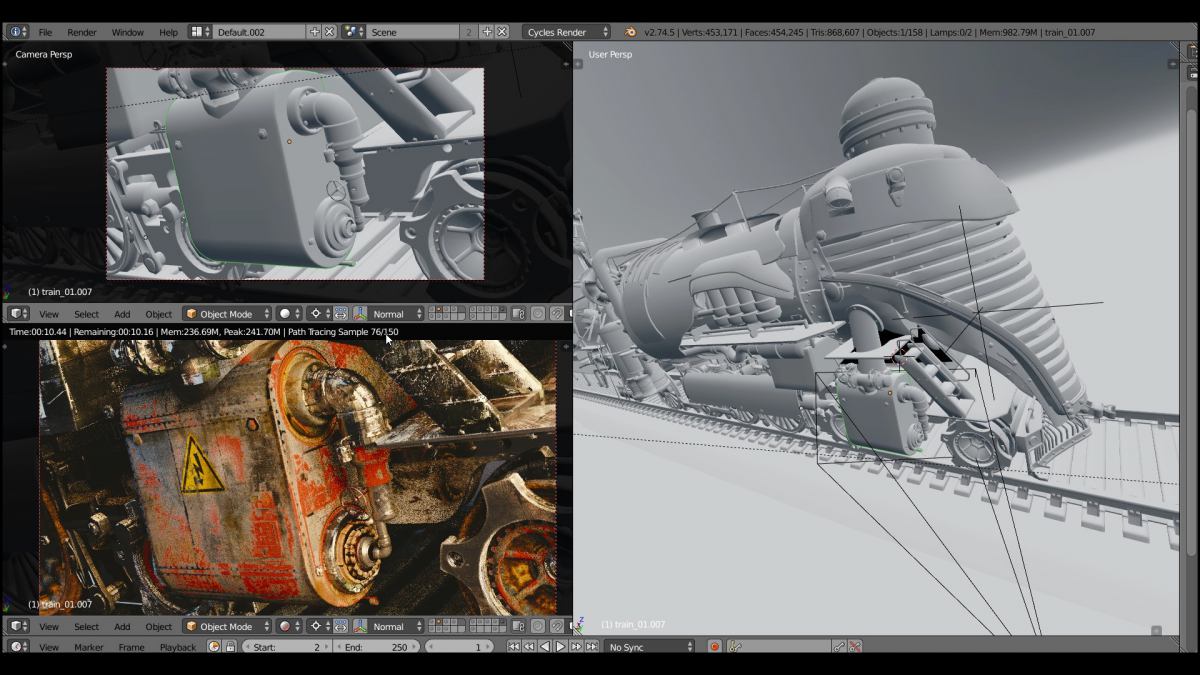 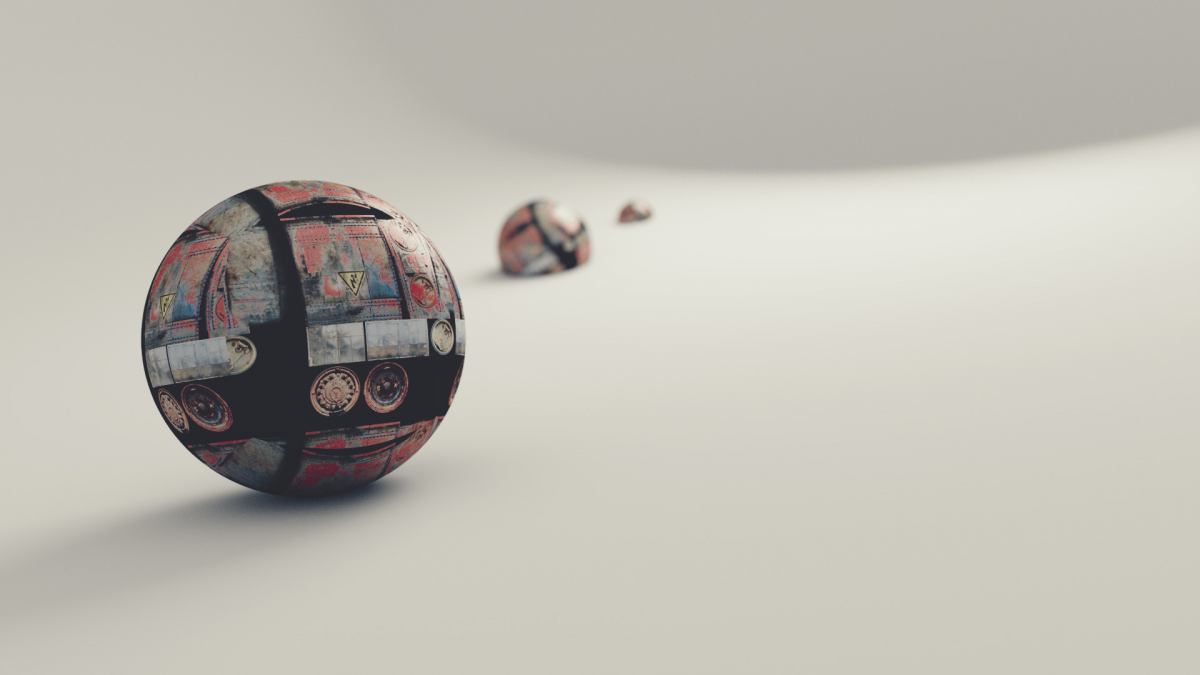 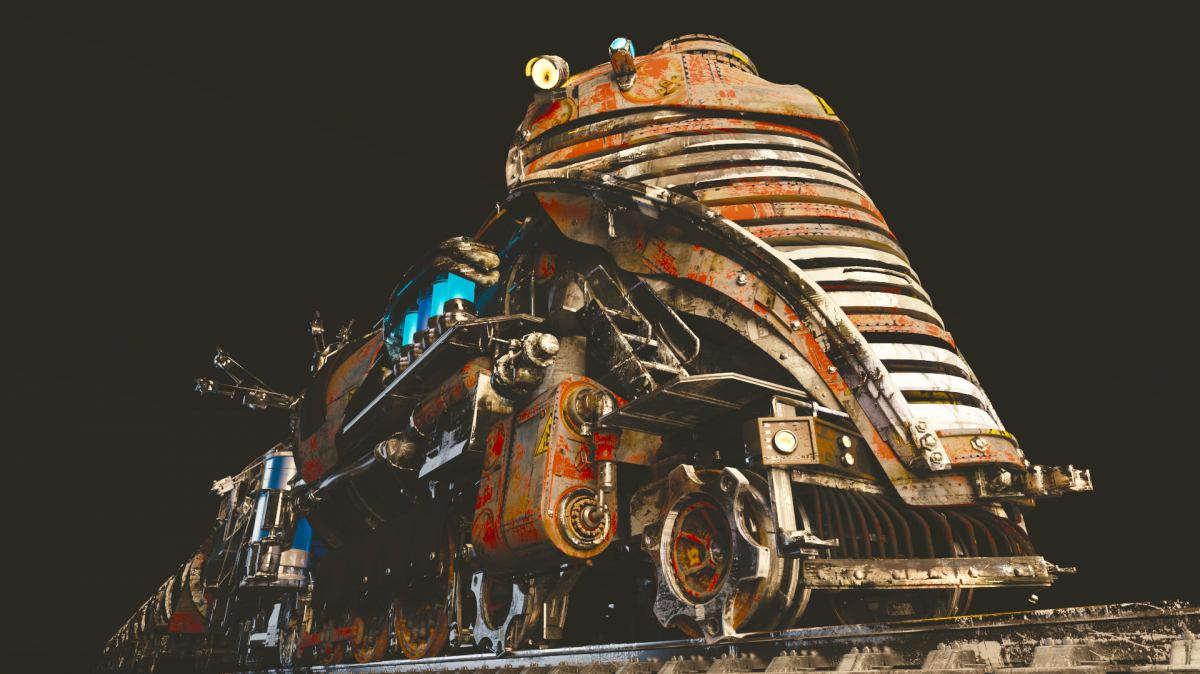 Aim at the epic.

Spice up your lighting scheme with a bunch of omni lights. In the end, you’re making a steampunk world full of Tesla locomotives.

There must be tons of omni lights. 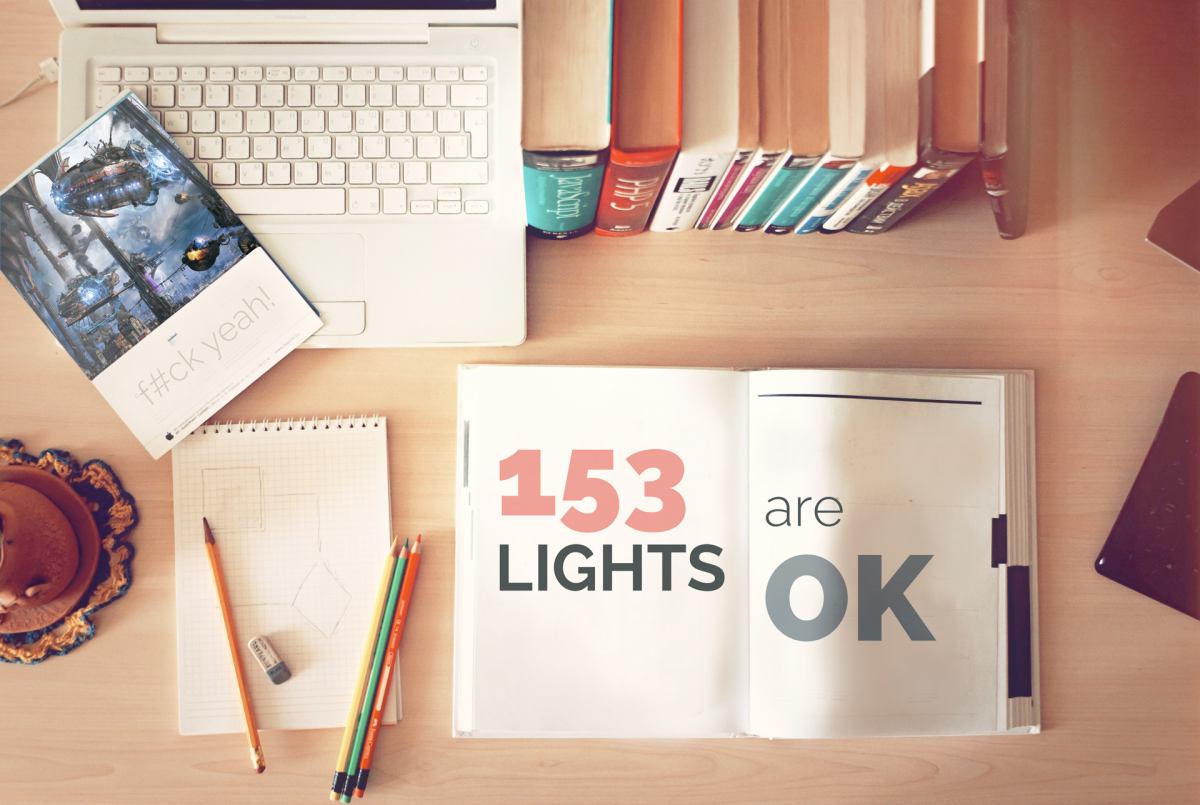 Usually the background demands much less attention compared to the foreground.

Use a combination of matte painting + low poly geometry.

Have fun with adding electricity and steam effects.

It’s much faster than using a smoke simulation. 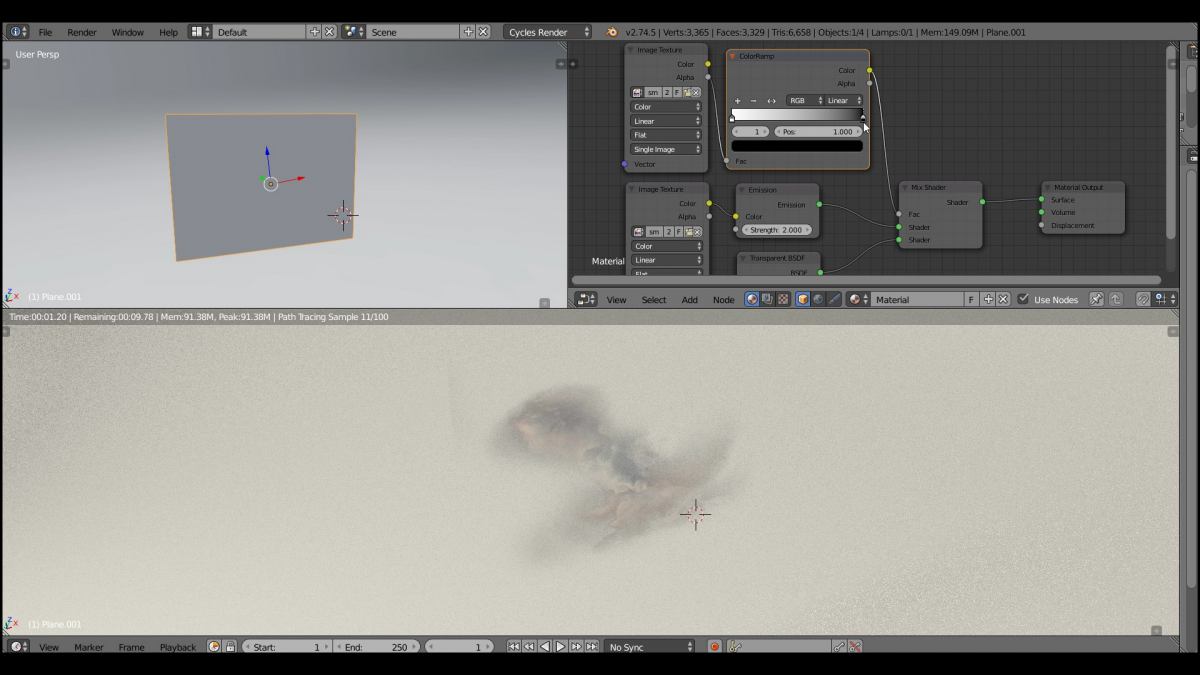 Let’s add the icing to the cake.

Before you show it to the world, put a finishing touches like glow and vignette.

Post processing can make or break your work, so don’t overdo it. 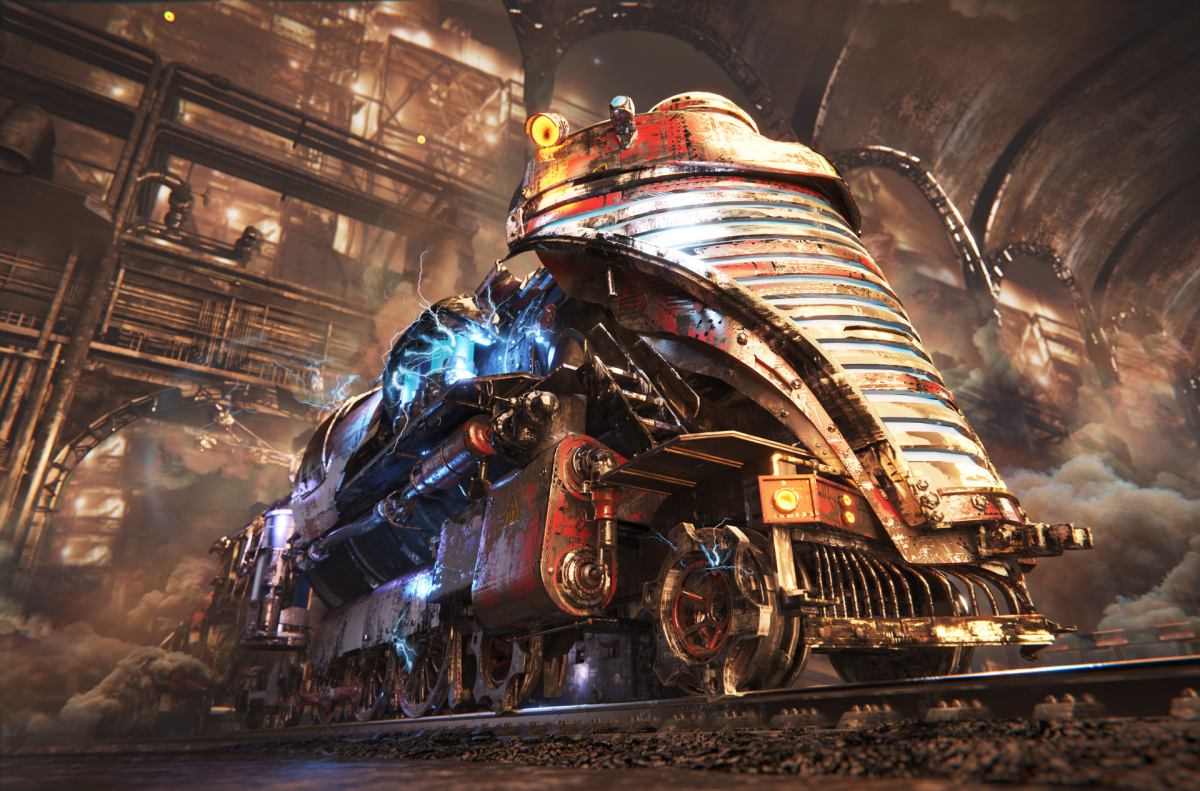 • Use the Mist Pass to enhance the aerial perspective

It features 12 easy-to-follow steps, so after watching it you’ll know the basics of post-processing. 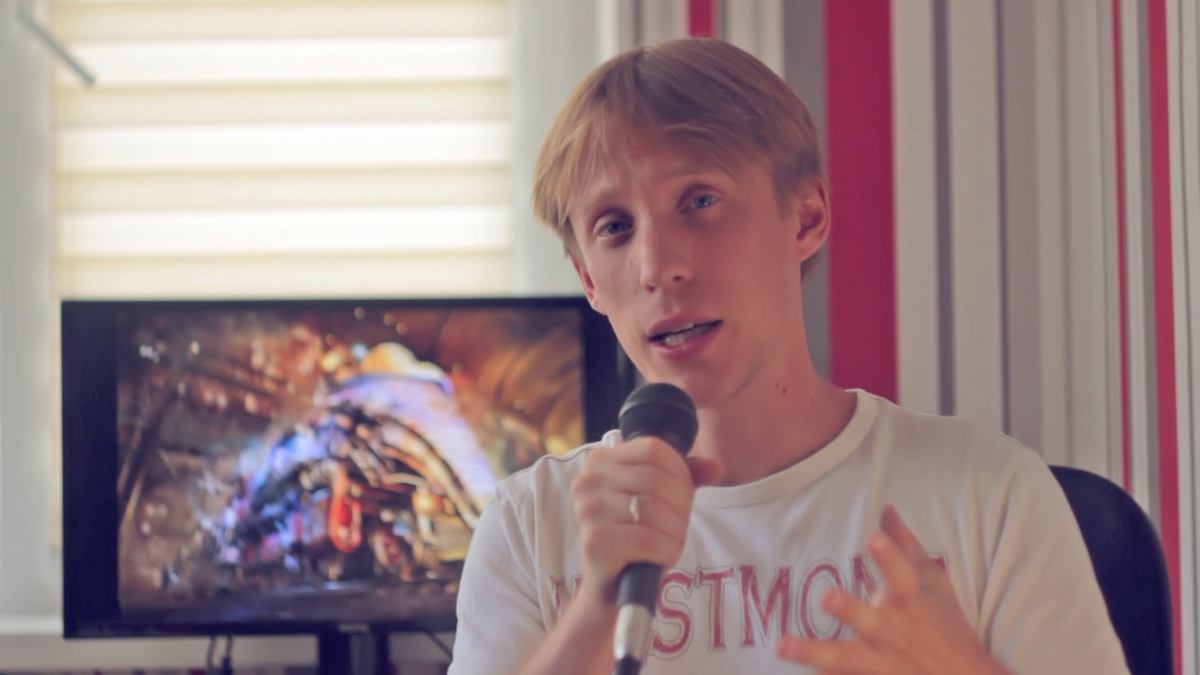 Hopefully after watching this tutorial you are inspired to create your own steampunk world.

If you like what you  watched and know somebody who can benefit from this tutorial, please share it with them now by pressing the buttons. And feel free to subscribe. Thanks!