Starting a successful career in 3D graphics is hard. I guess that’s why we committed to sharing tutorials and other content aiming to help people succeed in their craft.

We believe that every artist should be able to make a living doing meaningful creative work, it’s just a matter of practice, learning and joining forces with like-minded people. And drinking coffee (but opinions may vary, we take it easy in our team).

Also we’re proponents of the open-source movement and digital freedom in general.

My name is Gleb Alexandrov, I’m a coffee maniac who makes a living, creating digital art and training for people who love 3D graphics.

I feel super grateful to folks around me, including the vibrant Blender community. Together with Aidy Burrows we have successfully built Creative Shrimp from the ground up over the last years. Our tutorials have a massive following on Youtube, the recent courses became best-sellers and we’re thrilled to carry on.

I was introduced to computer graphics when I was 14 and after having a glimpse of 3ds Max, I was very eager to dive into this stuff. Unsurprisingly my first teapot renders were so unimpressive that I thought it’ll take an eternity for me to make a career in computer graphics.

When I watched my first 3ds Max tutorial from some crazy CD compilation of tutorials (we barely had internet back then in Belarus), I got part of my optimism back. If they can do it, I can do it too.

A realization that you don’t need to be super talented right away and can slowly work your way towards better version of you by watching tutorials, was a turning point in my life.

When I was 22, I got a 3D modeler job in a game development studio in Brest. In my free time I was learning Blender (right after I saw the first signs of this free open source software taking over the world of computer graphics). Thanks to Jonathan Williamson at CG Cookie and Andrew Price the Blenderguru getting into it wasn’t a complete blackhole of mystery.

I knew blender would become big soon just by watching how active its community had become, it was one of those smart crowd miracles of the 21st century apparently.

A few years later, when a CG competition called Her Majesty’s Zeppelins was about to start, I jumped in this boat and won the first place using Blender.

Over the next few years my art and tutorials were featured in magazines, books and educational websites. That’s where it really blew up. 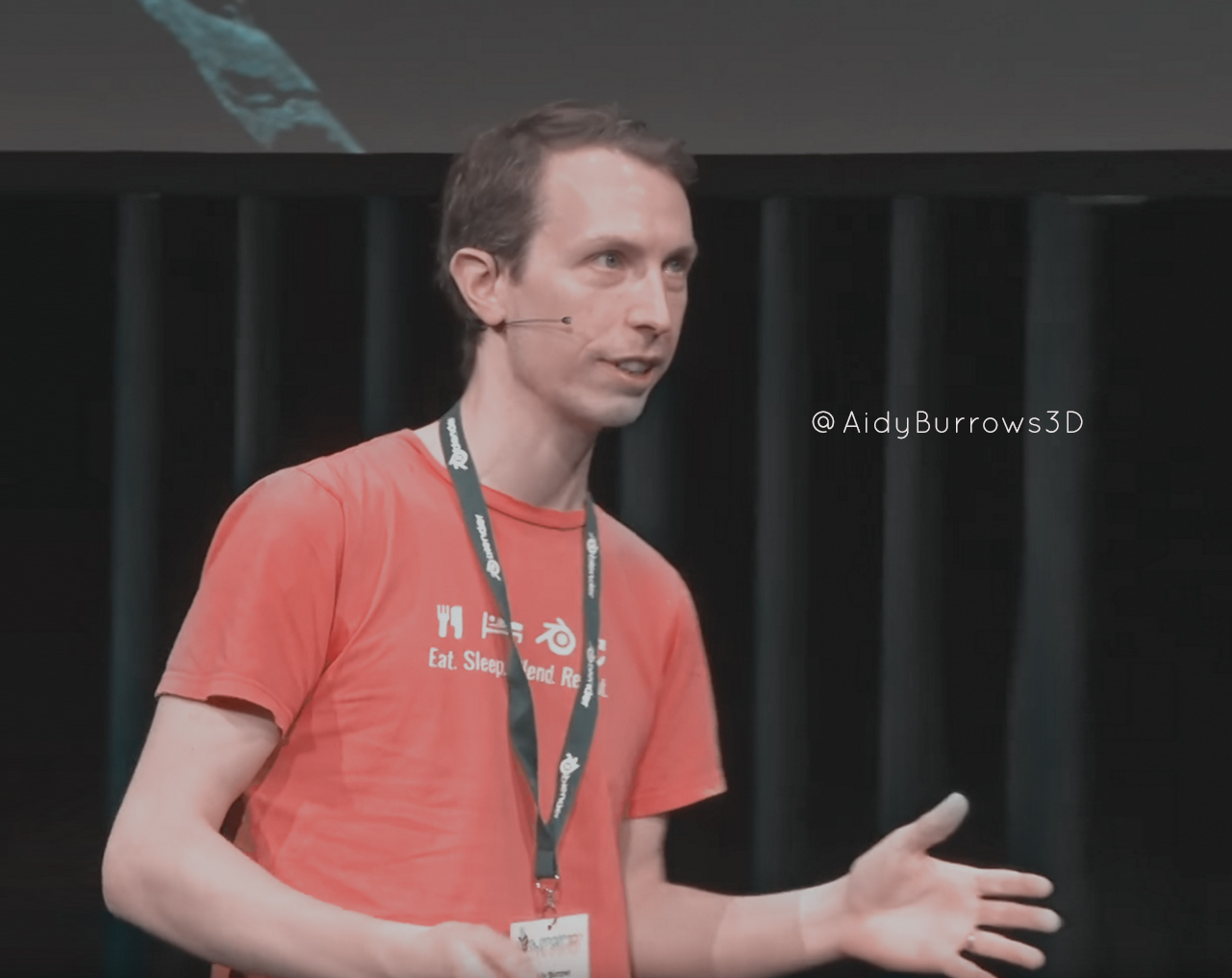 Aidy Burrows here, I believe armed with some solid 3D skills, Blender and a laptop, everyone can make a pretty big positive impact out there.

I’ve worked with 3ds Max while studying games and art in college. I’ve also worked with Maya after landing a job at TT Games working on environment art. I was having a lot of fun soaking up all the knowledge I could working on Lord of the rings and a whole load of Lego games, Lego Marvel, Lego City, Lego Hobbit etc.

Meanwhile I’d been looking at starting up my own freelance studio to earn an extra bit of money on the side. However, the cost of Max/Maya blew the whole enterprise out of the water! That’s when I really took Blender seriously and inspected it under the microscope. This is just as 2.5 was coming out. It didn’t take long before knowing some Blender skills was coming in very handy, helping me keep much of my workflow non-destructive in a way Maya couldn’t. Plus it was such a breeze to switch between painting/modeling/sculpting, it was a constant wonder how on earth this hugely capable piece of software was free?!

Around the time the kids were getting old enough to start school I wanted to be there to pick them up when they finished and take the freelancing much more seriously. I made an old site annex2nothing.com to share my notes on making transitioning from Maya an easier process. It was hugely rewarding making tutorials and I’d caught the tutorial bug wanting to share much more.

I teamed up with CGMasters.net and released a basic animation and environment Blender course, it turned out to be about 40 hours long, it was a MONSTER!

At this point I was well in love with the whole Blender scene, releasing loads of free tutorials. For the Blender Cloud and Steam I released a Blender game asset creation course. Next up I teamed up with Gleb who was busy exploding minds on CreativeShrimp to release SpaceVFX & Hard Surface Modeling courses for Blender.

Now there are many things on the go, creating lots more Blender tutorials, an urge to develop game creation skills more deeply in Unreal Engine 4, and much more!

Creative Shrimp, a Space for Artists

Since the first tutorial posted on Creative Shrimp, it has grown bigger and more successful and we still produce tutorials to help people learn new tricks and create better art.

Hugely positive feedback from you folks motivates us to develop and delve into crazy experiments, fly into space and make other things that we thought were unreal. It feels like you’re surrounded by friends all around the world. 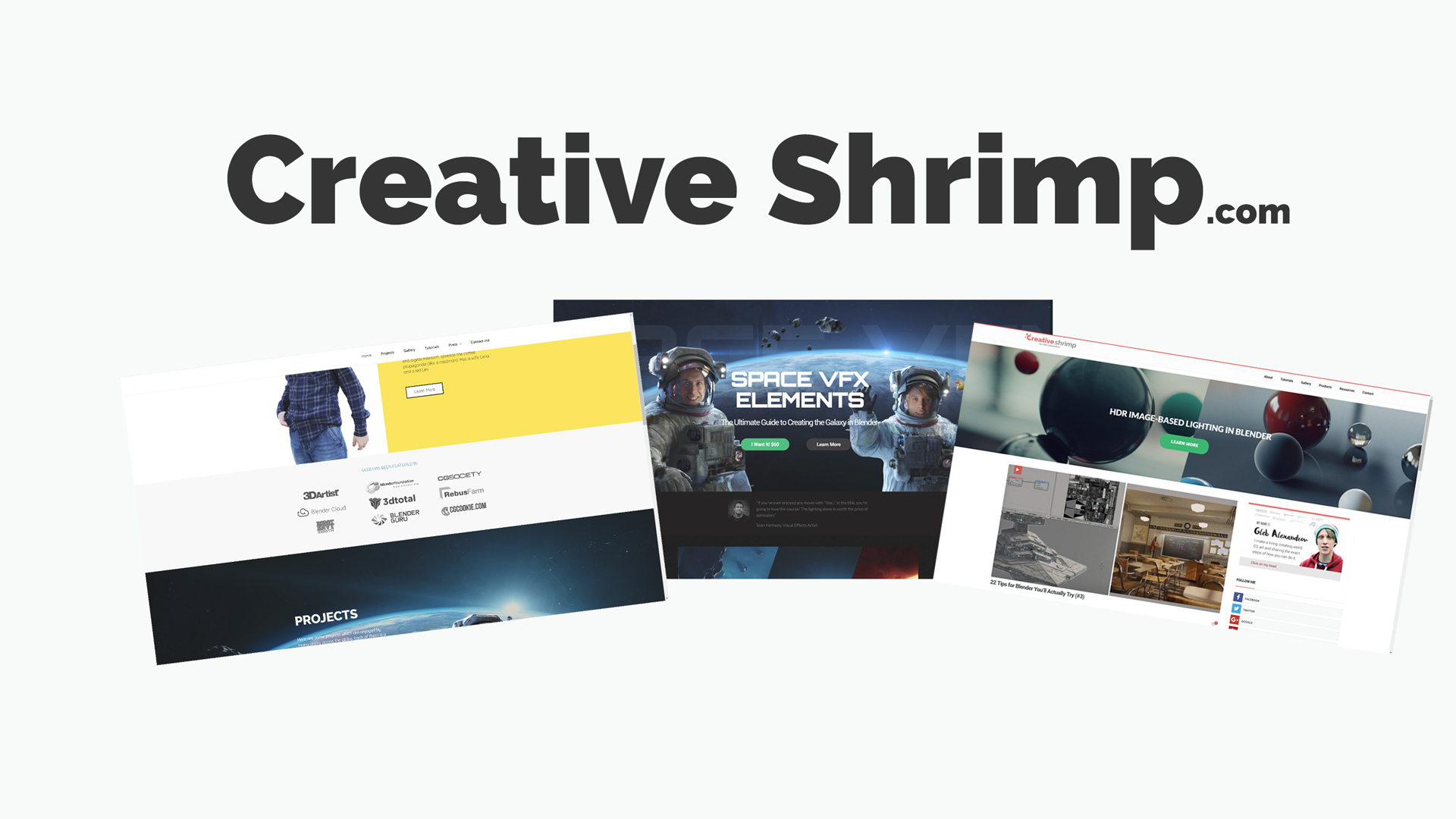 Thanks for reading this, we appreciate you! You motivate us to move forward.